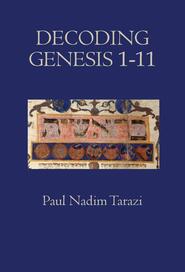 PROFESSOR TARAZI'S MOST RECENT BOOK strongly advocates the authority of Scripture over all theology. Not shunning from being provocative as concerns the value of venerated translations and traditions, Tarazi shows the importance of studying the semantic nuances of the original consonantal Hebrew text of the Old Testament to discover the true face of God. Having read his book, the reader feels one great spiritual need: learn scriptural Hebrew!

​Thanks to Father Paul's linguistic and cultural skills, this volume is a unique gateway into the beauty of Genesis and the internal coherence of biblical literature. Jargon-free and thoroughly provocative, it is a treasure trove even for seasoned Bible readers. Reading Decoding Genesis 1-11 is like reading over the scribe's shoulder "In the beginning".

The Rise of Scripture 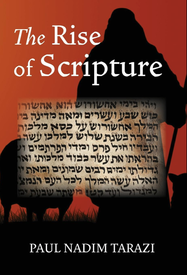 ​THOSE WHO EXPERIENCE THE BIBLE AS A LIVING TEXT understand that Scripture possesses a life and power all its own. Written by human hands, texts become sacred when they resonate with ultimate truths encountered in the direst of human circumstances. Paul Nadim Tarazi’s The Rise of Scripture offers a cogent argument for the particulars of how it is the Bible as we have it became Scripture. Avoiding futile speculation over Israelite textual and ethnic origins, Tarazi lays bare the Bible’s strategic defense against hellenistic urban hegemony over the fertile clay and desert environs of western Asia. With the help of biblical Hebrew—a “concocted language,” according to Tarazi—scribes wrote and shaped oral and textual materials into a manifesto of cultural resistance in response to the ethnocentric arrogance of the alien occupation. The successful accomplishment of such a defense relied upon a kind of leveling of the playing field, in which the writers of the Bible came to throw all their own false idols into the fire, resulting in the production of the most scathing collective self-examination in human history. It is the thesis of this book that the reading and teaching of Scripture brings human beings together in the barren wilderness of authentic human existence in obedience to, and under the care of the ultimate Shepherd, the God of Scripture.
ORDER NOW

Praise for The Rise of Scripture

"Contrary to the current hyperspecialization in biblical scholarhip, Tarazi articulates both Testaments into a unique synthesis. His mastery of the languages and culture of the biblical worlds, ancient and modern, forces the reader to reconsider the obvious."
​
Dr Philippe Guillaume
University of Berne (Switzerland)
"Professor Paul Nadim Tarazi offers an insightful view of Scripture as a mashal, a parable, rather than a historical account. In his view, the Pentateuchal stories are retrojections of the teachings of the Prophets, and the Gospels are likewise retrojections of the teachings of Paul. He argues for a functionalist, rather than essentialist ("Alexandrian") understanding of Scripture. His book is provocative, in a good sense of the word, and consciously Semitic. It is a must-read for all readers and students of the Bible who are not satisfied with the modern mainstream consensus concerning the identity and understanding of Scripture."
​
​Dr. Bartosz Adamczewski
Cardinal Stefan Wyszyński University in Warsaw
"A captivating reading of the Bible's origins and its nature. Father Tarazi offers a combination of both erudition and experience in a book that opens the reader’s mind into new horizons of Biblical interpretation. From Bedouin shepherd societies to concocted language theories this work proposes an Oriental approach explained to Western readers as never done before. A masterpiece."